How to Run Social Media Campaigns During Holidays

The holiday season is rapidly approaching, and it’s probably a little too late to do anything about your SEO at this point. We tried to warn you that you should get a jump on the long-term benefits of an SEO Campaign to increase holiday sales a while ago. But if you ignored our warnings and thought, “Meh, I’ll just do it later,” there’s still some hope for you. So, you’re welcome.

Last year, Topshop embarked on a unique social media campaign based entirely on the popular site, Pinterest. The campaign, titled, “Dear Topshop,” invited fans of the brand on Pinterest to create their very own “mood boards.” These boards were to describe the perfect Christmas day: Snow on the ground, tinsel on the tree, Christmas lights everywhere, family, fantastic food, holiday decorations galore, the ideal clothing, warmth, fires in the hearth, etc.

To be entered into the sweepstakes, Topshop had Pinterest users tag each of their photos with #DearTopshop followed by each board being submitted to the Topshop website. The experts judged boards at Topshop, and the winners brightened up their holiday season with shopping sprees worth up to £500 (almost $800).

With a unique hashtag and users having to submit boards to Topshop’s site, the brand upped its awareness and secured loyalty with current and new potential customers.

Frederick’s of Hollywood: 12 Teases for the Season

In 2013, Frederick’s of Hollywood wanted a Holiday social media campaign that would help them to reach a broader fan base and reward their fans with unique offers on tantalizing merchandise as well as reward winners with a shopping spree.

For each of the 12 Days of Christmas, Frederick’s of Hollywood put one item on sale for 24 hours. During this time, fans of the brand could not only by the particular issue at the sale price, but they could share the item from the unique 12 Teases for the Season Pinterest board Frederick’s set up featuring each piece. With each share on Pinterest, users were entered into the sweepstakes to win a $500 gift card from the brand.

However, the sweepstakes did not exist only on Pinterest. To capture Frederick’s engaged Facebook audience, those interested in entering the sweepstakes had to do so via Facebook, which then rerouted them to the Pinterest board. The deal enticed their fans to join, but the brand saw an increase in user engagement and audience growth with new users signing up for Pinterest. 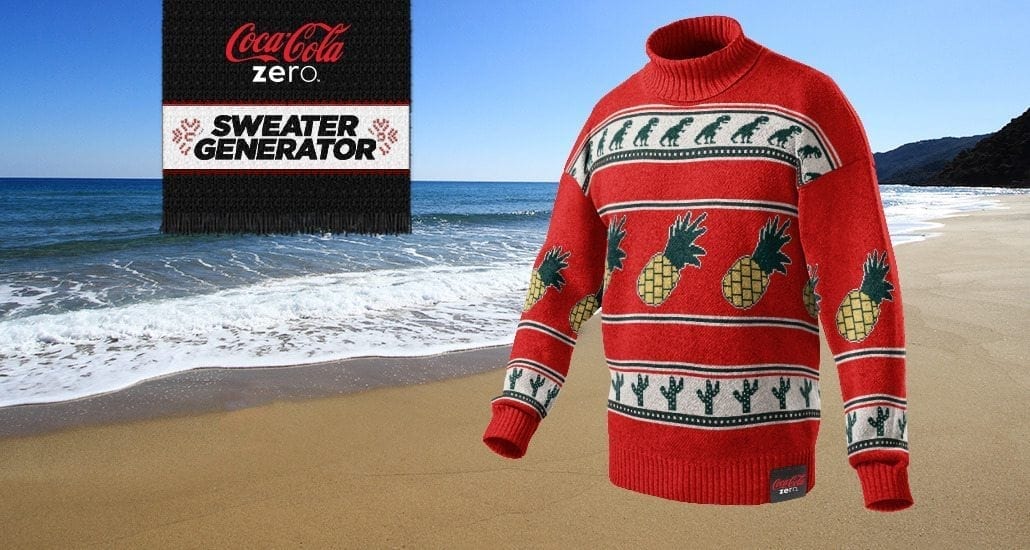 This holiday social media campaign from Coca-Cola was indeed one-of-a-kind and fantastic (in our opinion). In 2013, Coca-Cola knew precisely what their fans would love around the holidays: Hideous holiday sweaters. Who doesn’t love a good and ugly Christmas sweater?

Coca Cola‘s “Coke Zero Sweater Generator” let fans of the brand design their very own ugly sweater from a plethora of colors, patterns, and graphics to choose from. Users could adorn their sweaters with typical holiday decor, but Coca-Cola, knowing their fans’ unique tastes, offered a wider variety of truly random object to put on the sweaters.  When users were done creating their ugly sweaters, they were then encouraged to share them across their social media platforms and tied all of their social media campaigns together to try and gather votes. The top 100 sweaters with the most votes were then handcrafted and sent to their creators in time for the holiday.

Talk about a happy holiday.

Last year, Nokia got real with the holidays via their social media campaign, “Holiday Realness.” (Maybe too real?)

Nokia USA launched its Holiday Realness social media campaign to promote its new Lumia devices. The campaign lived by a simple mantra: If it’s real to you, it’s right. Nokia developed this idea via short videos of how people enjoy the holiday season, all featuring their new Lumina devices.

In congruence with the videos Nokia fans could share, the brand also launched a greeting card maker called, “Oh, Snaps!” Fans of the brand that wanted to partake in the making of greeting cards could add their friends’ faces to photos supplied by Nokia. (See image. Yikes.) Nokia offered 21 snaps with five being customizable. The greeting cards were easily shared across Facebook and Twitter. If users wanted to use the #holidayrealness hashtag on Twitter and Instagram, their cards were displayed on the Holiday Realness page, a microsite of Nokia USA.

Netflix: “Fireplace For Your Home” Trailer

While this isn’t necessarily a holiday social media campaign, it is an example of a well-timed and utterly hilarious idea.

In 2013, Google introduced the idea of having hours of streaming video on Chromecast of a fire burning in a fireplace. That was it a fire in a fireplace. The idea was to prompt those without fireplaces to have the digital fire displayed, giving the air of a real fire. Netflix, the ever-Wiley bunch they are, has had a similar video streaming on their site since 2010. So how did they compete? Make the fire a movie experience, of course.

The above video acts as the trailer for their fire video, and it was met with roaring (no pun intended) praise. “I cried when the fire spread to the other log” and “Guaranteed to get you to second base,” are among the critical reviews of the flick and on display in the trailer.

If you have time, watch the hilarious behind-the-scenes video of the making of Fireplace For Your Home.

Are you planning on any social media campaigns this holiday season? If so, let these ideas serve as inspiration! If you need some help in deciding what is right for your brand, contact the social media management team at SEO Inc. today.