Google is confirmed as saying that the Google Panda Update is now a part of Google’s core ranking algorithm. This official Google statement was posted on an excellent comprehensive guide by Jennifer Slegg:

“Panda is an algorithm that’s applied to sites overall and has become one of our core ranking signals. It measures the quality of a site, which you can read more about in our guidelines. Panda allows Google to take quality into account and adjust ranking accordingly.”

This announcement coincides with a major core ranking update earlier this week. Webmasters had reported significant changes in rankings (including a good spike up for SEO Inc.!). And now we know they may have had to do with Panda’s new inclusion into the algorithm. Maybe.

This confirmation is right in line with Google’s focus on better content. With Panda “baked into” the core algorithm, we can expect regular rises (or dips) based on your site content.

What to Expect from Future Google Panda Updates

The pursuit of higher quality content is an ongoing thing. While Google Panda joining the core algorithm eliminates the more sporadic updates we’re used to, the change actually creates several important questions. For one, you can say goodbye to those official Google Panda algorithm updates and announcements. But this means it will be harder to identify when a change in rankings is Panda-related or caused by one of the hundreds of other ranking signals in the core algorithm.

Google Panda was already rolling out slowly over time (since July of last year). This implementation merely puts Google in a position to reward sites with good content on a more regular basis.

“Core Ranking” Does Not Equal “Real-Time”

This is an important takeaway from this nnouncement. Gary Illyes has said over many conversations on Twitter that the core-ranking Panda update is NOT real-time. The core algorithm operates regularly, but not in real-time. So the changes will take time. Possibly even over a month and a half. 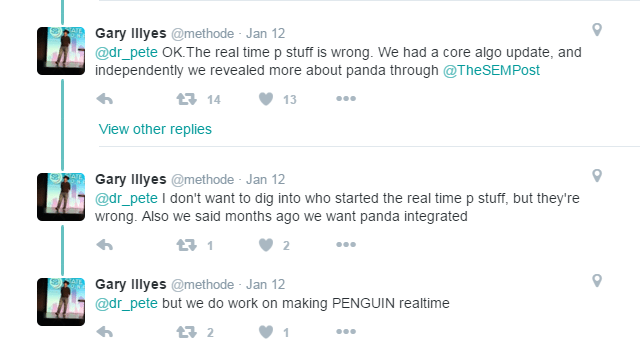 This could make identifying what caused a change in your rankings more difficult. Aside from a thin content notice in Search Console, you’ll be left on your own to find out the culprit.